French-trained chef Michael Ehlert is a month away from opening an order-at-the-counter enchilada restaurant called Lada in Far North Dallas.

At first glance, Ehlert’s new venture seems like a sharp change for him: He was the top toque at The French Room and Mirador, two of Dallas’ finest dining rooms. He’s a Culinary Institute of America grad who worked for Daniel Boulud in New York City.

Ehlert doesn’t see it that way. His menu at Lada is thoughtful, like a fine-dining restaurant’s might be, just with beer-braised chicken enchiladas and a kids’ menu with a “thrilled cheese” sandwich.

Lada’s six signature enchiladas are the heart of the 30-item menu, and they’re recipes Ehlert has worked on since 2018, when he started dreaming up the restaurant. “I’ve made each one of them 300 times,” he says of the enchiladas.

Besides the Tipsy Chicken, enchilada options include cider-glazed steak, orange-pepper carnitas, chipotle mahi and two vegetarian options: the cheese enchilada, made with cheddar, ricotta, tomato, avocado and poblano; and the shiitake mushroom enchilada.

Ehlert explains Lada’s food as “cuisine that is familiar but super fulfilling.” The goal is to open the kind of restaurant that people want to keep coming back to, not a special-occasion destination. That sentiment is especially important in 2020, when the COVID-19 crisis changed restaurants indefinitely. Fine-dining restaurants have found little chance for survival.

Lada is expected to open Nov. 12 near Hillcrest and Arapaho roads, a reinvigorated area of Far North Dallas that’s a few blocks from the western edge of Richardson.

And why enchiladas, we asked? If casual is key, why not a trendy food group like Detroit-style pizza or Nashville hot chicken. Or tacos.

“Man, I love tacos,” Ehlert says. And he put a few tacos on Lada’s menu. “Trendy” isn’t the right word for this restaurant, though. Ehlert says he was inspired by the Modern Texas movement. And he likes the simplicity of enchiladas.

These are enchiladas with an asterisk. The blue corn tortillas are made in the restaurant, and some enchiladas come artfully topped with greens from Profound Microfarms in Lucas, Texas. He notes that “presentation is super important.”

The preparation of the elotes is one example of how even a side dish is executed with detail: The corn is boiled in milk, which tenderizes it. The residual milk is then used to make ricotta. The finished dish is charred corn topped with house-made ricotta, cotija, cilantro, lime and a “citrus sprinkle” made of orange, lemon and lime zest mixed with chili powder.

Lada is Ehlert’s first time working on the operations side of a restaurant. He does have experience opening a restaurant, however. He had the tough task of reinventing The French Room at the Adolphus Hotel, spending three-and-a-half years getting ready for its re-debut in 2017. It had been Dallas’ most revered dining room, and it was Ehlert’s opportunity to make contemporary food in a classic space.

“It was educational, it was challenging, it was inspiring,” he says. “It was the most important thing I’ve done in Dallas.”

Lada was designed by Michael Hsu Office of Architecture, out of Austin, the same company that designed Merit Coffee Co. in Deep Ellum, Gung Ho on Lowest Greenville, Uchi in Uptown Dallas and Sprezza near Old Parkland. Lada will have aqua and “sunset colors” to jibe with terra cotta countertops and tile mosaics on the back wall.

Michael Hsu says the interior will have “an indoor-outdoor vibe” as it looks out onto a new park in the Hillcrest Village shopping center. From Lada’s patio, patrons will see a stretch of green space with coming-soon restaurants around it. The park has been in progress since at least 2018, when The Dallas Morning News profiled the new space in a story called “How a strip mall parking lot could become a park in Far North Dallas.”

Hsu says Lada is an example of how diners’ expectations for casual dining are heightened. He calls the natural woods and the warmth in the restaurant “almost home-like.”

“We wanted to make sure it felt like a very special place, but one you could go to every day and not get tired of it. It has a timelessness to it,” Hsu says. 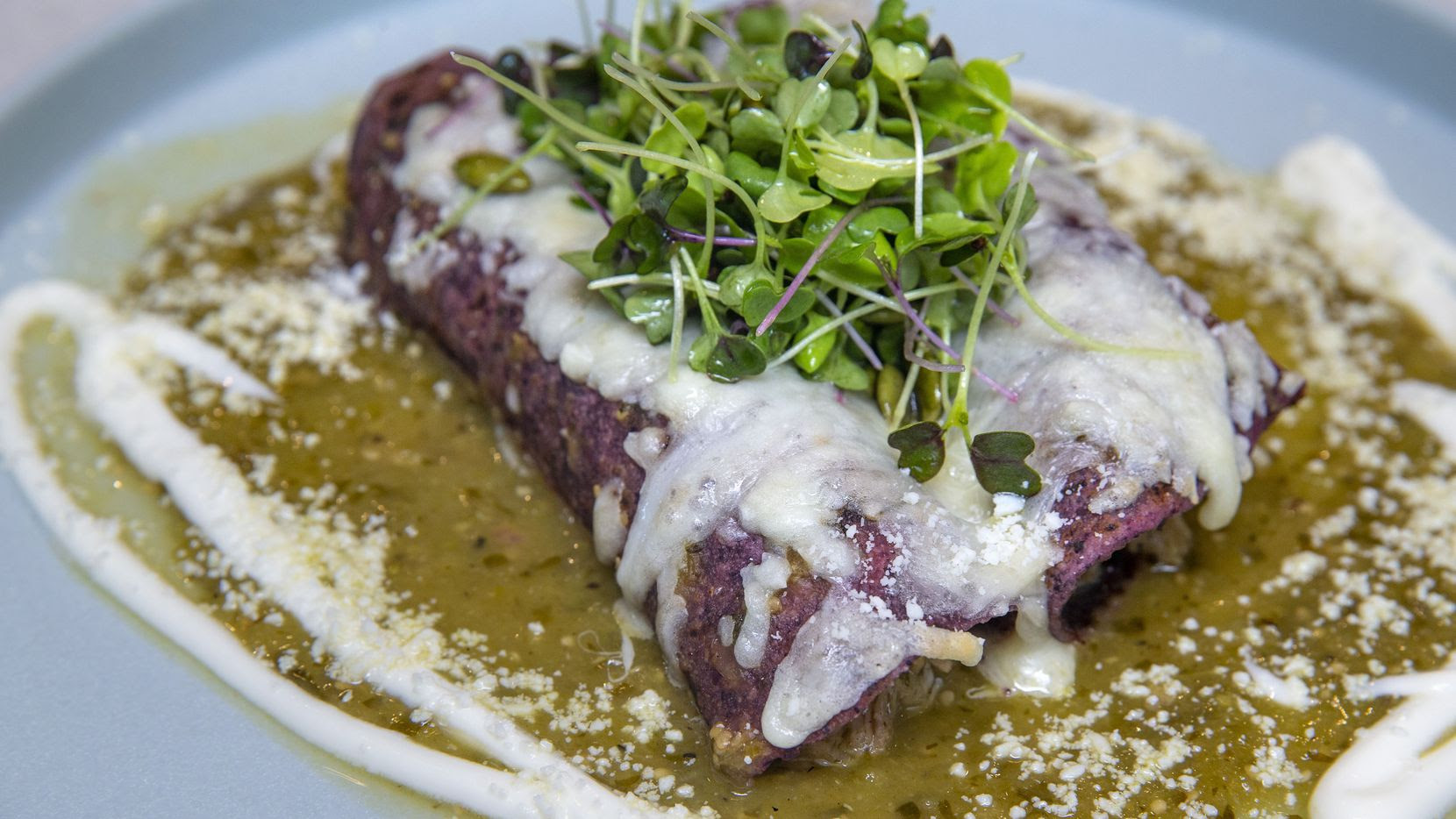 The Tipsy Chicken enchilada plate, prepared by Lada chef-owner Michael Ehlert, is made with beer-braised chicken and tomatillo sauce. Ehlert is set to open Lada restaurant in mid-November in Far North Dallas, near the western border of Richardson.(Lynda M. González / Staff Photographer) 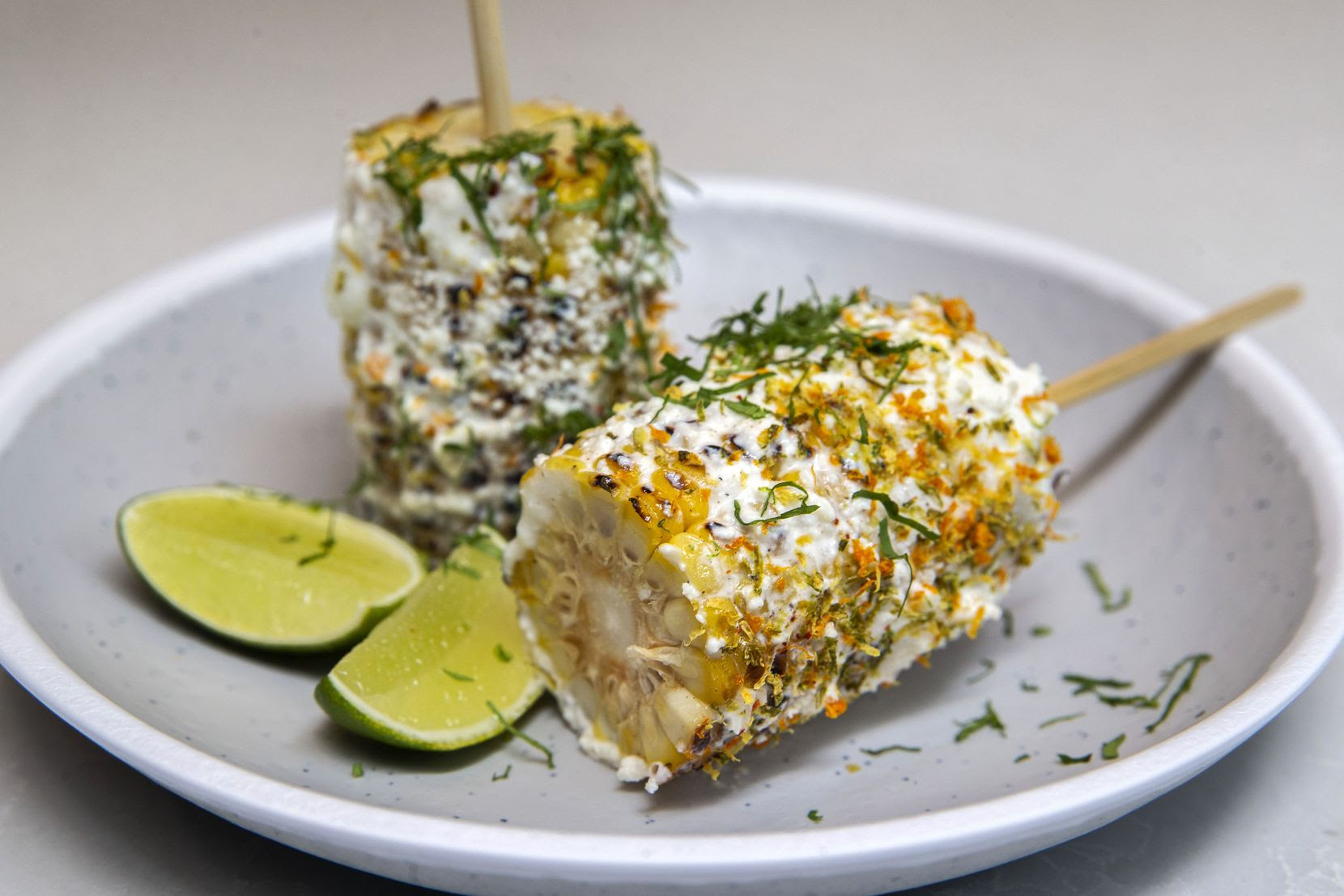 Elote on a Stick is topped with ricotta, cotija, chili-citrus sprinkle and cilantro, with lime on the side.(Lynda M. González / Staff Photographer) 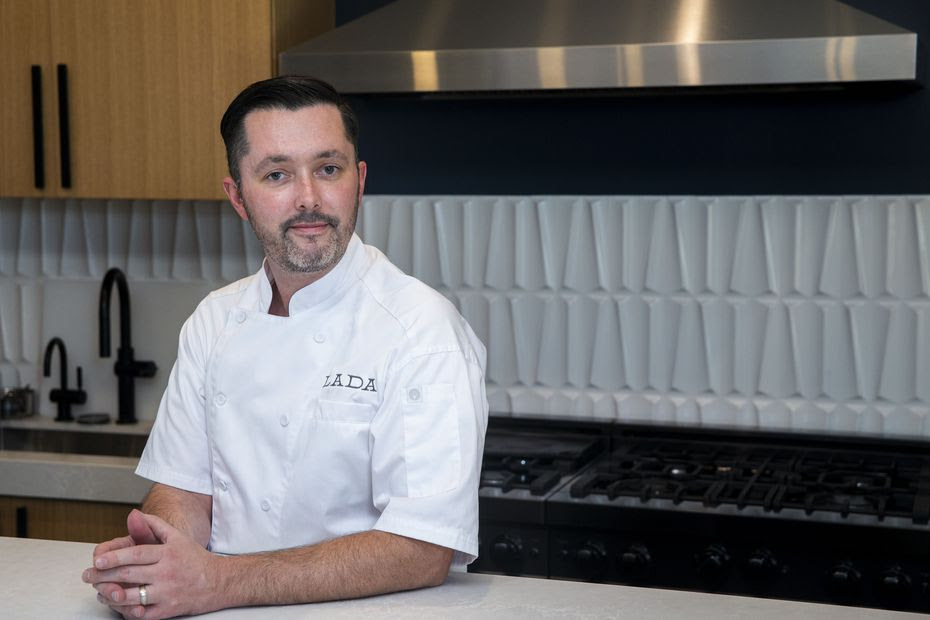 In Dallas, chef Michael Ehlert has worked at the Chesterfield, Hibiscus, The Front Room, The French Room and Mirador. His new chef-owned restaurant Lada is his first ‘fine-casual’ restaurant.(Lynda M. González / Staff Photographer) 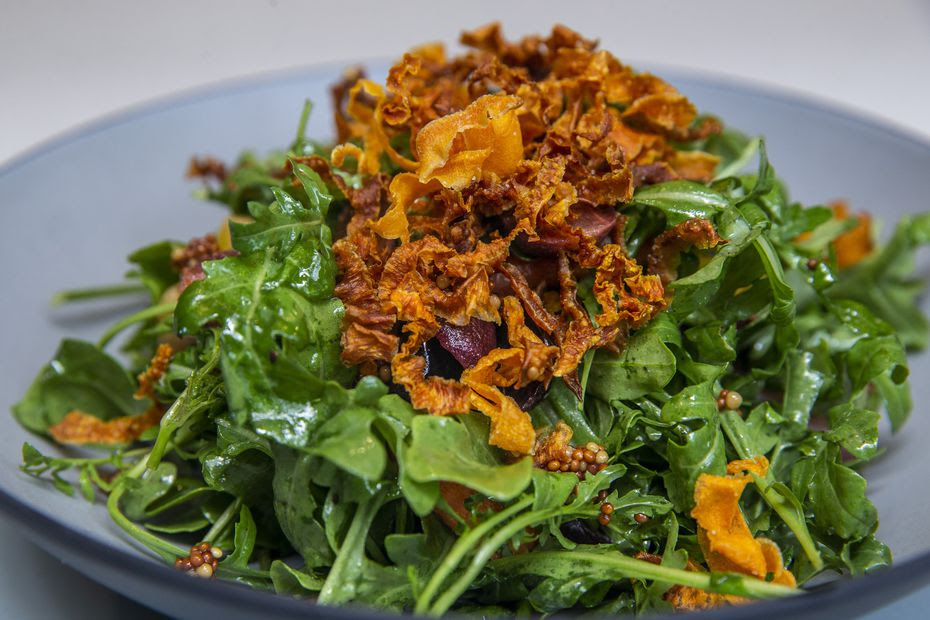